KFOR focuses on building a secure environment and guaranteeing the freedom of movement through all Kosovo territory for all citizens, irrespective of their ethnic origins, in accordance with UN Security Council Resolution 1244. The Contact Group countries have said publicly that KFOR will remain in Kosovo to provide the security necessary to support the final settlement of Kosovo authorities.

In August 2005, the North Atlantic Council decided to restructure KFOR, replacing the five existing multinational brigades with five task forces, to allow for greater flexibility with, removing restrictions on the cross-boundary movement of units based in different sectors of Kosovo. Then in February 2010, the Multinational Task Forces became Multinational Battle Groups, and in March 2011, KFOR was restructured again, into just two multinational battlegroups; one based at Camp Bondsteel, and one based at Peć.

Minted in nickel and given antique silver finish, this coin is imbued with bold colorful enamel on the obverse and a photo insert of snowy mountains on the reverse. 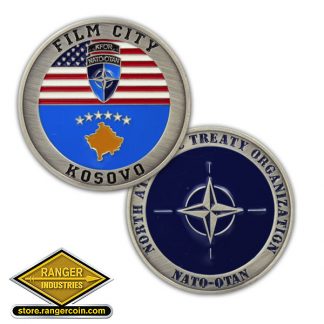