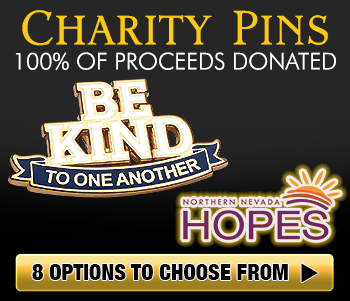 We STRONGLY recommend making any Christmas purchases BEFORE December 15th to try to avoid any late arrivals.

JFC Brunssum is actively engaged with many headquarters, be they within the NATO Command Structure or stood up by nations, Allies and Partners alike. This initiative embraces liaison with NATO member and non-member nations, International Organisations, Non-Governmental Organisations, and organisations who are security-focused stakeholders.

Headquarters Allied Joint Force Command Brunssum, HQ JFC Brunssum, is located in Brunssum, Limburg, the Netherlands, in the heart of Northwest Europe – an area which is often referred to as “the balcony of Europe”, or “land without frontiers” because of its easy access to several countries. JFC HQ Brunssum was built upon the former HQ Allied Forces Central Europe’s (HQ AFCENT) infrastructure, which has been in use since 1967 and former RHQ AFNORTH. An energized ‘Regional Focus’ will strengthen NATO’s ability to be more proactive and responsive to emerging threats.

JFC Brunssum is actively engaged with many headquarters, be they within the NATO Command Structure or stood up by nations, Allies and Partners alike. This initiative embraces liaison with NATO member and non-member nations, International Organisations, Non-Governmental Organisations, and organisations who are security-focused stakeholders.
By energising this ‘Regional Focus’ JFC Brunssum seeks to foster an open and active family of headquarters based on enduring relationships focusing on issues of common interest in order to enhance coordination, cooperation and situational awareness.

The enhanced NRF construct agreed at the Wales Summit in 2014 is built on an operational command and control mechanism that includes: a deployable Joint Task Force HQ (JTF HQ) annually provided by and rotated between NATO’s two Joint Force Commands – Brunssum and Naples; the Very High Readiness Joint Task Force (VJTF); an Initial Follow On Forces Group (IFFG); and the Response Forces Pool (RFP). The JTF HQ was introduced in 2012, aiming to improve the NATO Command Structure by increasing flexibility and deployability. Participation in the NRF is preceded by a six-month NATO exercise programme in order to integrate and standardise the various national contingents. Generally, contributing nations carry out a pre-training period of between 6-18 months prior to assuming the role of an NRF high-readiness unit. Once the overall preparation period has been completed, certified forces are held on stand-by to deploy on operations for 12 months.

The obvers features the coat of arms of the AJFCB and the reverse has the 2 crossed flags of the Netherlands and NATO.

Minted from solid bronze and given antique finish, this coin is accented with richly-colored enamels. 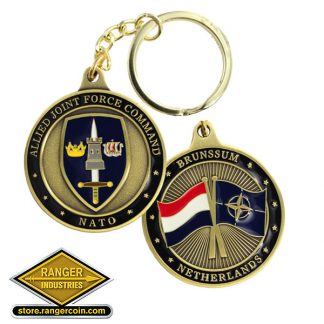