Founded in 1947, the Joint Chiefs of Staff is charged with coordinating the combat capabilities of the U.S. Armed Forces. Comprised of the highest ranking officers from the Army, Navy, Air Force, and Marines, it functions as the nation’s elite military advisory command.

Experts in military science and combat strategy, the members of the Joint Chiefs of Staff consult regularly with the President to offer recommendations on war planning and other national security concerns. Directing the operation and integration of U.S. forces throughout the world, the Joint Chiefs of Staff play a vital role in enhancing America’s ability to decisively engage the enemy.

This adhesive medallion salutes the dedicated service of the members of the Joint Chiefs of Staff, whose skillful and determined leadership ensures America’s military superiority.

Peal the paper off the back and these medallions will permanently stick to any clean and hard surface. The reverse has an adhesive backing allowing it to be permanently fixed to painted, metal or glass surfaces.

If you find a new use for these, send us a picture! 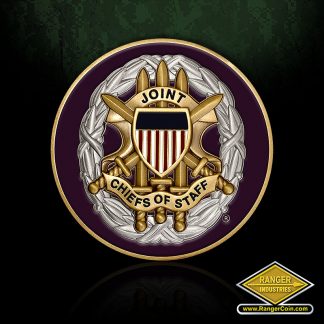