ON CLEARANCE - Click Here to View All Clearance Items

Joint Base Lewis-McChord represents immense logistical and fighting capability. The McChord Field component hosts the 62 Airlift Wing and the 446th Airlift Wing, and also hosts the headquarters for the Western Air Defense Sector, composed of Washington Air National Guard and Canadian Forces Air Command personnel. The 1st Air Support Operations Group provides Air Liaison Officers for I Corps. The joint base is home to US Army I Corps.

Joint Base Lewis-McChord, formerly Fort Lewis and McChord Air Force Base, is a joint United States military installation in Washington State, and is one of the largest and most modern military reservations in the United States. Joint Base Lewis-McChord continues the tradition of adventure and excellence of its two namesakes:  Army Captain Meriwether Lewis, and Army Air Corps Colonel William C. McChord. Airlift operations continue to span the globe, and every theater of combat action as been fueled by the courage, bravery, and ‘victory mentality’ of Lewis-McCord soldiers and airmen.

Joint Base Lewis-McChord is the most-requested duty station in the US Army. It has abundant high-quality, close-in training areas, including 115 live fire ranges.  Over the Coast Range and into Eastern Washington, the Yakima Training Center provides extensive field maneuver areas and additional live fire ranges.

The commemorative Joint Base Lewis-McCord coin salutes the dedication of all who served. The coin is finished in rich enamel, the obverse featuring the Distinctive Unit Insignia of US Army I Corps, in brilliant colors.

This handsome challenge coin is bronze and given a shiny finish,  and is imbued with durable and attractive enamel.

This is an out of date design and will not be remade after product is sold out. 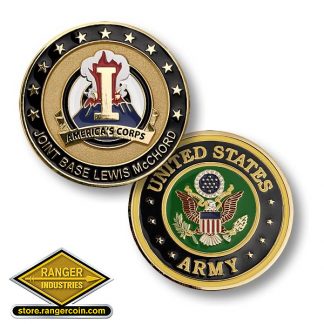