When you’re facing the crossroads, simply draw this coin and let it choose the path. No hemming and hawing here – in a flash of symbolic green when affirmative and bright red when negative, the results are known instantaneously.

They shoot zombies in the head and get a handful of coins – the most satisfying of which is this one, made only for registered Contract Zombie Hunters, but now available to you, too.

The relentless march of countless undead, dragging themselves towards the few remaining humans in an unstoppable wave of apocalyptic death and destruction…it’s the stuff of nightmares. But it can happen. These guys are prepared, and can do well what they have been hired to do. Kill zombies.

The sheer masses of zombies vastly outnumber the licensed zombie hunters. But it’s why the finely-honed skill and expertise of the Contract Zombie Hunters for the Integrated Zombie Eradication and Containment Command are in high demand.

While they are rewarded by our appreciative tears of joy, their brotherhood is signified by this IZECC Contract Zombie Hunter Challenge Coin. The “Contract Zombie Hunter” coin is superbly minted in shiny nickel with a stone polish cloisonné finish on both sides for durability – now and through the coming zombie apocalypse.

The obverse of this finely-crafted token of gratitude features the Seal of the Integrated Command containing a Special Forces spear, a biohazard symbol and crossed swords indicating service in the Zombie Wars.

The reverse, with the blood-red wording of “Zombie Hunter” above a successful kill rendered in ghoulish undead green, is carried by every Contract Zombie Hunter not just as evidence of license and bonding, but of their status as a successful zombie eradication machine.

Carry the IZECC “Contract Zombie Hunter” Challenge Coin in solidarity for the miserable brave few who could be digging ditches, changing tires, or amortizing assets, but have instead pledged to protect human lives by eradicating the undead.

This is an NWTMINT surplus item and is packaged in a unique header card. 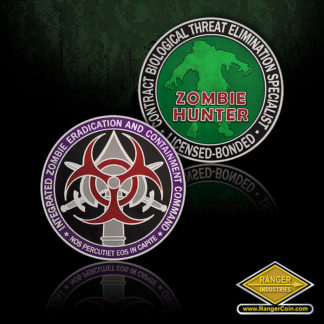