It's Breast Cancer Awareness Month - Click here to DONATE to stop the disease that affects 1 in 8 women during their lifetime.

This coin honors the CIA and its employees and is minted in a brass alloy, given an antique finish and imbued with the bold colors of the CIA emblem.

The Central Intelligence Agency (CIA) is a civilian intelligence agency of the United States government. Its primary function is collecting and analyzing information about foreign governments, corporations, and persons in order to advise public policymakers.

The current CIA has a number of functions in common with other countries’ intelligence agencies. The agency both collects and analyzes intelligence. The CIA’s headquarters is in the community of Langley in the McLean CDP of Fairfax County, Virginia, a few miles west of Washington, D.C. along the Potomac River.

Sometimes, the CIA is referred to euphemistically in government and military parlance as Other Government Agencies (or OGA), particularly when its operations in a particular area are an open secret. Other terms include The Company and The Agency.

This coin honors the CIA and its employees and is minted in a brass alloy, given an antique finish and imbued with the bold colors of the CIA emblem.

This coin is packaged in our signature Ranger Industries protective polymer coin flip.

The Central Intelligence Agency has not approved, endorsed, or authorized this product or the use of the C.I.A. seal. 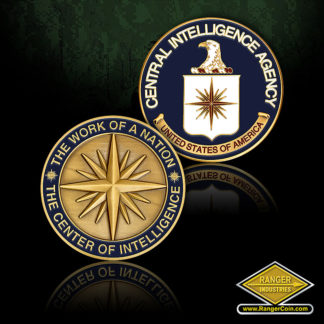