The extremely versatile C-47 Skytrain was a staple of allied aviation during World War II, serving on several continents and in every major battle throughout the war.

The extremely versatile C-47 Skytrain was a staple of allied aviation during World War II, serving on several continents and in every major battle throughout the war.

Capable of carrying up to 6,000 pounds of cargo and large enough to hold 28 soldiers in full combat gear, the C-47 was essential to troop transport and supply. It also performed extremely well in emergency medical airlift missions, with enough room to hold 14 stretcher patients and three medical attendants.

Critical to Allied victory in the Pacific, the C-47 enabled Allied forces to match the mobility of the island-hopping Japanese Army, particularly in Burma Campaign. On the European continent, it proved equally as important to the allied cause, playing a major role in the Battle of Bastogne.

This coin honors the C-47 Skytrain for its mission in supporting and sustaining allied forces throughout World War II. struck in a brass alloy and finished in antique bronze, this coin’s reverse is imbued with rich enamel accents. 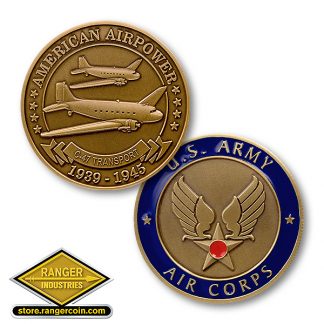