The premier four-engine heavy bomber, the B-29 Superfortress was one of the largest aircraft developed during World War II.

The premier four-engine heavy bomber, the B-29 Superfortress was one of the largest aircraft developed during World War II.

Designed expressly for high-altitude precision bombing missions, the B-29 proved extremely versatile throughout its service, performing reconnaissance, electronic warfare, and search and rescue missions with great success. Deployed primarily from small air bases in the Pacific, the B-29 was legendary for its ability to fly over vast stretches of ocean undetected to pinpoint and destroy Japanese targets. Equipped with an advanced defensive armament system and capable of carrying massive bomb payloads, the B-29 is most well known for executing the bombing missions in August of 1945 that forced the Japanese surrender.

This coin honors the pivotal role played by the B-29 Superfortress during World War II and commemorates the aircraft’s enduring legacy of freedom. The obverse features a formation of two B-29 Bombers below the words “America Airpower.” The reverse features the historic emblem of the U.S. Army Air Corps.

Minted in a brass alloy and given an antique bronze finish, the coin’s reverse is imbued with rich enamel accents. 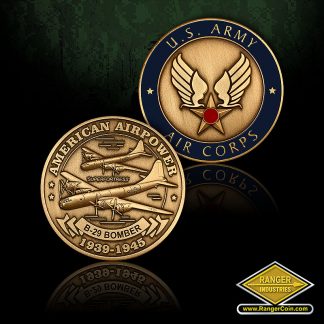