Serving in all theaters of the Second World War, the P-38 was the main aircraft fighter of many of America’s top aces in the Pacific theater.  With twin booms, the Lightning was a long range interceptor fighter with a revolutionary design that served in all theaters of war.

First introduced in 1941, the B-24 Liberator was produced in greater numbers than any other American combat aircraft during World War II. Before production of the aircraft ceased in 1945, more than 18,000 B-24s had been manufactured.

Designed and used primarily as a heavy bomber, its effectiveness as a maritime patrol bomber and heavy transport aircraft was demonstrated throughout the war. The B-24 served in all major combat theaters and made a significant contribution to the success of the Battle of the Atlantic.

This coin pays tribute to the success of the B-24 Liberator, one of the most important and influential aircraft of World War II. Struck in a brass alloy and finished in antique bronze, this coin’s reverse is imbued with rich enamel accents. Each coin comes packaged with a descriptive header card that provides insight into the role of the B-24 in the Allied war effort.

Minted in a brass alloy, this coin contains an antique bronze finish. Each coin comes packaged with a header card that describes the U.S. Army’s history of innovation as a leader in the fight for freedom. 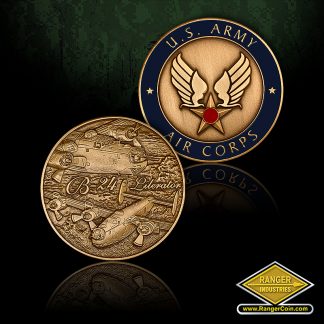