This AH-64 Apache challenge coin serves as a lasting memento for every serviceman associated with the Apache.

This AH-64 Apache challenge coin serves as a lasting memento for every serviceman associated with the Apache.

The Boeing AH-64 Apache is a four-blade, twin-engine attack helicopter with tailwheel-type landing gear arrangement, and tandem cockpit for a crew of two. The Apache was developed as Model 77 by Hughes Helicopters for the United States Army’s Advanced Attack Helicopter program to replace the AH-1 Cobra. First flown on 30 September 1975, the AH-64 features a nose-mounted sensor suite for target acquisition and night vision systems. The Apache is armed with a 30-millimeter (1.2 in) M230 Chain Gun carried between the main landing gear, under the aircraft’s forward fuselage. It has four hardpoints mounted on stub-wing pylons, typically carrying a mixture of AGM-114 Hellfire and Hydra 70 rocket pods. The AH-64 also features double- and triple-redundant aircraft systems to improve survivability for the aircraft and crew in combat, as well as improved crash survivability for the pilots.

The AH-64 played roles in the Balkans, in the invasion of Iraq, and in Operation Enduring Freedom in Afghanistan from 2001. Most Apache helicopters that have taken heavy combat damage have been able to continue their missions and return safely.

Now you can own a piece of history with the AH-64 Apache challenge coin. Minted in bronze with an antique finish, the obverse features front, side, and top profiles of the Apache in the background, while a Grasshopper in flight commands the foreground, while the reverse features an area suitable for engraving a name or personal message. 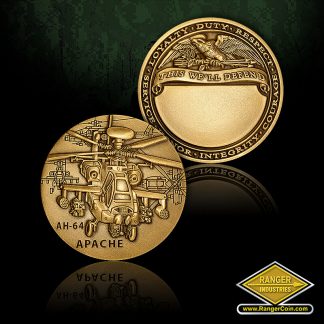