The Fort Bragg 82nd Airborne Jump Wings are issued at three levels. After successful completion of five jumps out of a high-performance aircraft, soldiers are awarded Basic Wings, which allows the paratrooper to be assigned to an Airborne unit. The Basic Wings badge features the famous wings and parachute, with the Airborne AA insignia. The Senior Parachutist must have successfully graduated from the 82nd Airborne Jumpmaster Course and participated in a minimum of 30 jumps (including 15 jumps with combat equipment) and served with an Airborne unit for a total of at least 24 months.

Airborne warriors who wear the US Army Fort Bragg 82nd Airborne Jump Wings badge are the elite in airborne combat and wear the famous AA—All American Combat Service Identification badge. The story of the 82nd Airborne is this:  thousands of unnamed paratroopers in jump boots, baggy pants and maroon berets, always ready and willing to jump into danger and then drive on until “mission accomplished.”  The US Army Fort Bragg 82nd Airborne Jump Wings coins honor these warriors who have fearlessly gone into bloody battle. One citation reads, “…33 days of action without relief, without replacements. Every mission accomplished. No ground gained was ever relinquished.” Carry this coin as a badge of honor.

Each of these Fort Bragg 82nd Airborne Jump Wings coins is minted in a rugged brass alloy. The obverse of these handsome coins carries the appropriate wings and parachute, with the Airborne AA insignia. The raised circumference lettering is 82nd AIRBORNE DIVISION, THE ALL AMERICANS. The reverse is engravable, for name, dates of service, or special message or remembrance. The top features an American Bald Eagle over the United States Army banner. The circumference is a bold statement of Army values: Loyalty, Duty, Respect, Service, Honor, Integrity, and Courage.

Minted in a brass alloy and finished in bronze, this coin is imbued with rich enamel on both sides. 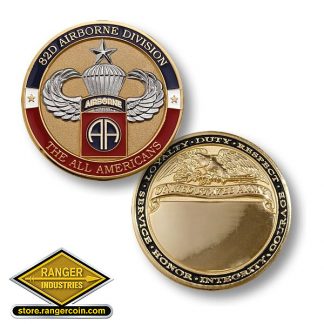