The52d Fighter Wing  is a wing of the United States Air Force stationed at Spangdahlem Air Base, Germany. It flies the F-16CJ fighter aircraft. It was activated in 1948, but derives significant elements of its history from the predecessor Second World War 52d Fighter Group, which is now the 52d Operations Group, subordinate to the wing.

In concert with USAFE wings at Ramstein Air Base, Germany, the 52d Fighter Wing directly supports the strategic mobility mission once conducted at Rhein-Main Air Base, Germany. The wing provides logistics support for C-17 Globemaster III and C-5 Galaxy aircraft, crew, passengers and cargo to sustain air mobility operations throughout Europe, Africa and Southwest Asia. The 52d Fighter Wing also supports USAFE’s Joint Fires Center of Excellence, whose mission is to conduct joint and combined training focused on the effective integration and application of tactical fires. 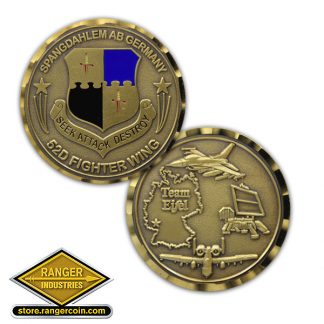