This brass coin salutes the 1st Division of the U.S. Marines. Struck in a brass alloy, this coin has an attractive use of enamel, making a striking impression.

This brass coin salutes the 1st Division of the U.S. Marines. Struck in a brass alloy, this coin has an attractive use of enamel, making a striking impression. The reverse contains the logo of the Marines set in a semitransparent red enamel that allows the look of radiance.

Based at Camp Pendleton, the 1st Marine Division is the oldest, largest, and most decorated division in the Marines. Organized officially in 1941, the 1st Marines took Guadalcanal in the first major Pacific campaign of World War II, earning the first of its nine Presidential Unit Citations and forming the basis for its insignia featuring the name “Guadalcanal” and the Southern Cross.

The 1st Marines landed at Inchon, Korea and fought with deadly effect at Chosin; reinforced Guantanamo Bay and served aboard ships during the Cuban Missile Crisis naval blockade; fought in the first major encounters in South Vietnam, most devastatingly during the Tet Offensive; and crushed all opposition as part of Operation Desert Shield.

During Operation Iraqi Freedom, the 1st charged to Baghdad, seized Saddam Hussein’s hometown of Tikrit, and helped liberate the insurgent stronghold of Fallujah.

This coin is minted in a brass alloy and coated with an antique bronze finish. Emblazoned with the 1st Marine Division insignia, the obverse features a hand crafted enameled finish that is both attractive and durable. The reverse features the insignia of the Marines against a radiant red background.

This coin honors the Old Breed’s pedigree of guts and grit in protecting America’s freedom wherever its enemies may hide. 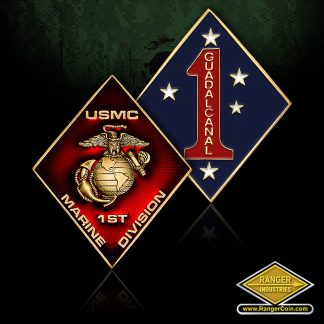