United States Army Garrison (USAG) Baumholder, known to locals as “the Rock”, plays a vital role in the deployment and support operations in the European, African, and Asian theaters. It is one of the largest overseas concentrations of combat soldiers and has become an integral part of the German town’s economy, culture, and well-being. In fact, the Army operates twelve local churches, a cinema, a PX, and a hospital while the soldiers spend their hard earned paychecks patronizing local businesses.

The 16th Sustainment Brigade saw two deployments to Iraq in support of Operation Iraqi Freedom as the 16th Corps Support Group. It deployed to Iraq for its first tour as a Sustainment brigade from July 2008 to October 2009.

This lapel pin is dedicated to the proud men and women who serve in the 16th Sustainment Brigade at Baumholder, Germany. The pin features the coat of arms of the Knight’s Brigade. 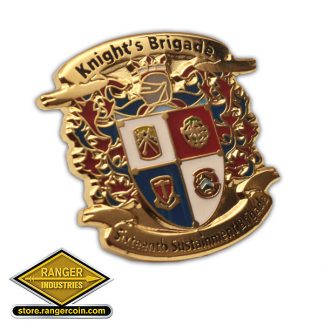