In May 2012, the CAB deployed five of its seven battalions to Afghanistan, while at the same time sending one attack battalion, 3-159th ARB, to Kuwait to support Operation Spartan Shield in the Persian Gulf. Only 1-214th remained in Germany. The aviation battalions were organized into similarly equipped task forces, each capable of providing the same mission and support to units operating in RC East, RC West and RC North. 3-58 AOB, known as TF Guardian, deployed to manage the airfield at Tarin Kowt in RC South. While the brigade headquarters redeployed in September as part of the drawdown of surge forces, the battalion task forces Storm, Gunslinger, Guardian, Ready and Pirate remained in Afghanistan providing direct support to units across the country. Task Force Pirate, 1/211 ARB from the Utah Army National Guard joined the Griffin Brigade for this deployment, providing seamless integration with their active duty counterparts in RC North and RC West. At the height of the deployment, 12th CAB had Soldiers and helicopter crews operating from more than 30 different locations.

This handsome challenge coin is bronze and given an antique finish,  and is imbued with durable and attractive enamel. 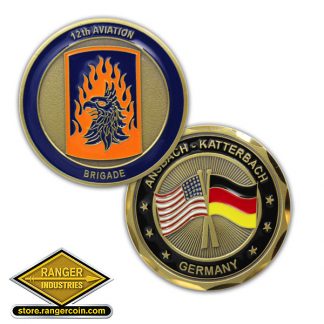